Another thing: inflation. Just when you thought the construction-cost spike was abating, it hit a new record.

By Wolf Richter for WOLF STREET.

Sales of new single-family houses have been zigzagging along low levels for months. In October, they rose 7.5% from September, after having plunged 11% in September, according to the Census Bureau today. At a seasonally adjusted annual rate of 632,000 houses, they were down 5.8% from the already low levels a year ago, and down 37% from two years ago.

A similar plunge occurred in sales of previously owned homes: -34% from peak in October 2020 and -28% from a year ago.

Homebuilders reported plunging traffic of prospective buyers of new single-family houses, according to the National Association of Home Builders last week. Its index of Traffic of Prospective Buyers has plunged for eight months in a row and in November fell below the May 2020 level. 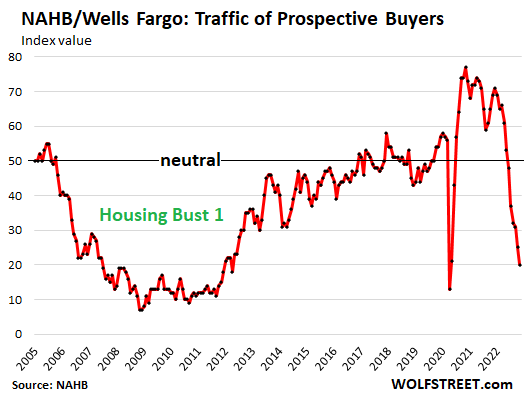 Cancellations Spike, worst in the Southwest.

And many of those folks that do show up to look at a house, and that then do sign a sales contract are massively getting second thoughts, followed by buyer’s remorse, followed by canceling those contracts – and those spiking numbers of cancellations are not included in the new-house sales data by the Census Bureau above, which just tracks signed contracts.

According to the homebuilder survey by John Burns Real Estate Consulting – with a sample size of roughly 20% of all new home sales – the cancellation rate spiked to 25.6% in October, up from a rate of 7.9% in October 2021 and from 10.9% in October 2019. Over a quarter of the signed contracts are cancelled! Chart via Rick Palacios Jr., Director of Research at John Burns (click to enlarge): 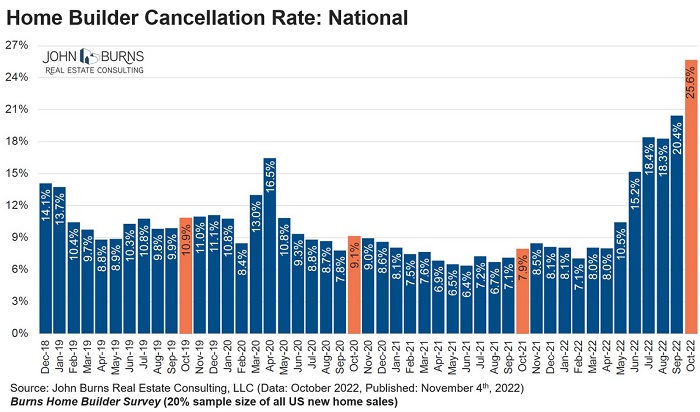 This kind of huge spike in cancellation rates renders the sales-contract signings data a practically irrelevant figure because a cancelled contract is no longer an actual sale (chart via Rick Palacios Jr., John Burns, click to enlarge): 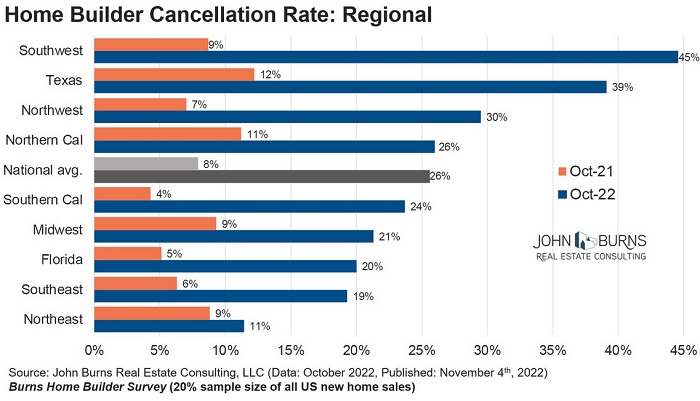 From shortage to glut: Inventories continue to spike.

Inventory for sale in all stages of construction jumped to 470,000 houses, up by 21%, from the high levels in October last year, the highest since March 2008. Compared to the early phases of Housing Bust 1, it was the highest since September 2005:

Supply of unsold new houses has been in the 8-10 months range since April, due to the combination of low sales and the surge in inventory. Supply in October was 8.9 months, Housing Bust 1 levels.

Another thing: inflation. Just when you thought…

Construction costs of single-family houses – excluding the cost of land and other non-construction costs – seemed like they’d peaked in June, and then the spike slowed or stalled, and on a year-over-year basis, the spike backed off from a historic record of 18.3% in June to 16.7% in August. But then it started spiking all over again and in October hit a new historic record of 18.4%. This inflation will continue to dish up surprises, just when you least expect it. 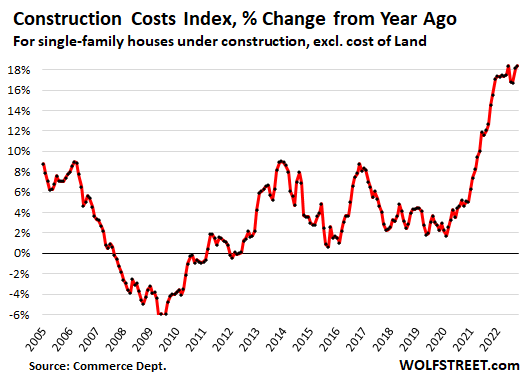 Enjoy reading WOLF STREET and want to support it? You can donate. I appreciate it immensely. Click on the beer and iced-tea mug to find out how:

Would you like to be notified via email when WOLF STREET publishes a new article? Sign up here.